The Endocannabinoid System (“ECS”) is an essential regulator of bodily function, responsible for maintaining homeostasis among all organ systems. There are few physiological processes that are not affected by it to some degree – so it is quite surprising to realize that the ECS was virtually unknown up until the turn of the century[1]. Despite the importance of the ECS as an essential regulatory mechanism in our bodies, knowledge of it remains limited among American physicians due to a void of education surrounding the ECS in medical schools. In this post we will explore the vital history of cannabis, the discovery and importance of the ECS and how we are bridging cannabis science with modern medicine.

The Vital History of Cannabis

Given the federal illegality of cannabis, it is no surprise that our knowledge of the potential benefits and applications of the plant is lightyears behind other modern day crops, so it is important to understand the basic history. The plant species cannabis sativa is one of the earliest plant species cultivated by humans. In fact, archaeological evidence suggests mankind has had a relationship with the plant for over 10,000 years. The first documented use of cannabis as a medicine dates back to 2737 BC and in 1839 Western adoption of cannabis could be attributed to the Irish physician, Dr. William O’Shaughnessy. Between 1854 and 1890, 50% of medicines in the US had some form of cannabis in them[2].
By 1918, 60k lbs of cannabis was being grown annually in the US for medical purposes. Merck, Bristol-Meyers, Burroughs Wellcome, Eli Lilly, Parke Davis (now Pfizer) and Smith all produced cannabis medicine in the early 20th century[2].

Unfortunately, in 1937 advances in cannabis medicine were brought to a halt when the Marihuana Tax Act was signed into law. The act deemed the cultivation, production, prescription, retail, possession, and use of cannabis illegal without prior procurement of a Marihuana Tax Stamp. In 1970, Nixon declared cannabis a Schedule 1 drug “highly addictive and dangerous” – Controlled Substance Act (separating drugs into 5 tiers, tier 1 being the worst). For context: cocaine, methamphetamines, and opiates were classified as Schedule 2 and Xanax, Valium and Ativan fell under Schedule 4 – crazy, I know.
Although difficult, some research was still being accomplished with regards to the plant and our physiology during this time. An Israeli organic chemist named Raphael Mechoulam discovered CBD and THC in the early 1960’s. The discoveries led to further research and the eventual discovery of cannabinoid receptors in our bodies. In 1974, in the midst of the War on Drugs, although not widely known, studies from the Medical College of Virginia concluded that THC could help inhibit the growth of certain cancers. And in the 1980’s the National Cancer Institute had conducted a series of studies on THC which eventually led to the first FDA approved synthetic cannabinoid. The drug by Pfizer is called Marinol and is primarily used by cancer patients undergoing chemotherapy, and HIV patients[2].

In the early 1990’s, Mechoulam’s group discovered the first endocannabinoids and by 1995 they had identified the foundational components of the endocannabinoid system. The ECS is an ancient system, estimated to be over 500 million-years-old and is common to all vertebrates and invertebrates, with the exception of insects[2]. 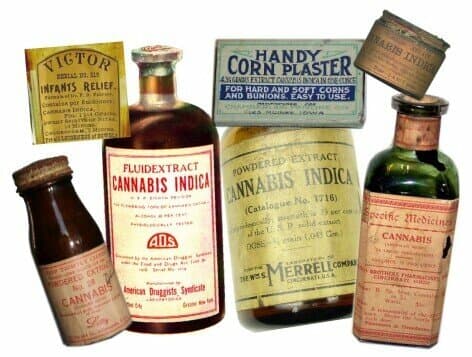 So what is the ECS?

The Endocannabinoid System (“ECS”) is an essential regulator of bodily function, responsible for maintaining homeostasis among all organ systems. The ECS is the largest neuroreceptor in the human body. It is important to understand that the ECS exists and is active in your body even if you do not use cannabis. There are three major components to the ECS: endocannabinoids, receptors, and enzymes.

Deficiencies and overactivity of the ECS have been linked to broad and significant health challenges such as chronic pain, diabetes, multiple sclerosis, migraines, cancer, and obesity. Modern research continues to show us how this complex system modulates healing and helps us maintain optimal and stable health and wellness.

There are two major cannabinoid receptors (CBRs) in the ECS, CB1 and CB2. A common role of CB1 and CB2 receptors appears to be the modulation of the release of chemical messengers: CB1 are receptors interact mainly with neurons, while CB2 receptors interact with immune cells[3]. Research has linked the ECS to many functions in our bodies, including: appetite and digestion, metabolism, chronic pain, inflammation and other immune system responses, mood, learning and memory, motor control, sleep, cardiovascular system function, muscle formation, bone remodeling and growth, liver function, reproductive system function, stress, and skin and nerve function. All these functions contribute to our homeostasis, or the stability of our internal environment. For example, if an outside force were to cause your body pain, your ECS would kick in to help your body return to normal. 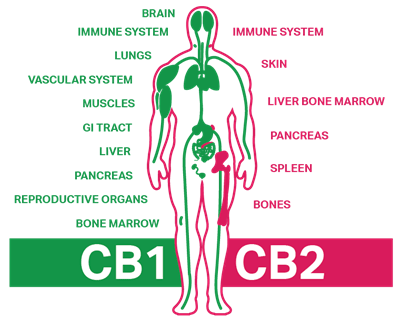 Cannabis and your ECS

Cannabis pharmacokinetics is the study of the absorption, distribution, metabolism, and excretion of cannabis with regard to the human body. Bridging cannabis science with medicine requires the understanding of cannabis history, plant science, decades of anecdotal use, pharmacology, and the study of the ECS.

Tetrahydrocannabinol (THC) is one of the main cannabinoids found in cannabis. This is the compound that give you the euphoric effect, getting you “high.” THC and the other cannabinoids are quite powerful as they have similar chemical properties to endocannabinoids and can interact with your ECS by binding to both CB1 and CB2 receptors[4]. Cannabidiol (CBD) studies have demonstrated CBD’s potential therapeutic roles in targeting the following conditions: seizure, anxiety, inflammation, overproduction of reactive oxygen species, neurotrauma and neurodegenerative diseases (i.e. Parkinson’s, Huntington’s, Alzheimer’s, ALS, and MS), cancer, preservation of brain function in liver failure, and bone healing. Research suggest that THC and CBD work better together.

Today as our understanding of the ECS  continues to expand, it has become an interesting target for the development of new drugs derived from the cannabis plant, or synthetically to produce desired effects and improving the quality of our lives. Given the federal illegality of the plant, it has been historically quite difficult for institutions, universities, or big pharma companies to study it. We are just starting to scratch the surface of how the ECS works and the potential benefits cannabis derived medicine could have with regards to helping the ECS maintain homeostasis in our bodies. The future of therapeutics focused on the ECS appears to be bright and may offer more effective and safer remedies for disorders that have previously been managed by less effective remedies.

2)     ADVENT Academy – “The Foundation of Cannabinoid Medicine”, Tiberio Erdely has completed and passed the course.www.adventacademy.com/products/511878?variant=30128471015505

Clean Sweep for Marijuana on Election Night
Scroll to top