The US could soon be the last bastion of federal marijuana prohibition in North America as Mexico’s new President Andrés Manuel López Obrador continues to advocate for legalization.

Late last year, Obrador’s party—which controls the majority of the Mexican legislature—sent a proposal to the senate that would legalize the cultivation and consumption of cannabis for recreational use.

“Mexico needs to urgently reform the way it deals with the use and consumption of drugs,” Mexican Interior Secretary Olga Sánchez Cordero said in a Mexican Senate forum on cannabis regulation last month. “The prohibitionist policy that’s been followed in the past, without a doubt, has increased violence in our country.”

Producers in Canada, where marijuana is legal for medicinal and recreational uses, are watching the Mexico situation closely and already positioning themselves for a continental takeover.

“In a selfish way, we’re pretty happy that [federal legalization in the US] hasn’t passed, because Canadian companies are setting up all over the world,” said Khurram Malik, CEO of Canadian cannabis producer Biome.

Companies are increasingly looking to joint ventures, acquisitions, and licensing agreements in an effort to position themselves in front of the best financial opportunities, according to Eric Berlin, a leading cannabis law expert

“Folks are absolutely looking globally, and the folks who are knowledgeable about this industry view it as a global play,” he said.

Indeed the US looks like it could become the missing link in a North American cannabis boom. Just ask Chanda Macias, CEO of Women Grow, a for-profit entity that serves as a catalyst for women to influence and succeed in the cannabis industry as the end of marijuana prohibition occurs on a national scale: “[W]hen the time comes, the U.S. will emerge as the biggest provider of cannabis to the world. But it’s just not time yet.” 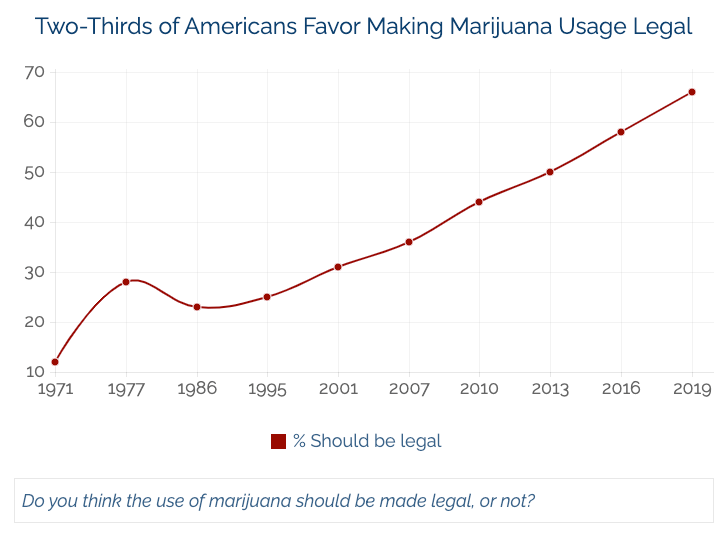 The latest results of Gallup’s annual Crime survey, conducted Oct. 1-13, show support for legalizing marijuana holding steady at 66% from last year, after rising over 30 percent from 2008 to 2015.

Not only have 66% favored legalizing marijuana in the 2018 and 2019 Crime polls, but also in another Gallup survey conducted in May focused solely on marijuana.

The survey results show interesting trends when broken down by various demographics. Among the findings:

“Americans have rapidly shifted to backing legal marijuana in the past decade after consistently expressing opposition for 40 years, says Gallup of the results’ key insights. “[G]iven generational differences in support for legalizing marijuana use, it is likely the percentage who endorse making marijuana use legal will continue to expand in the years ahead.”

Edible Sales Up in Four States After Vape Scare

Since the beginning of a health scare related to black market vaporizers and concentrates, sales of THC-infused edible products have climbed steadily in a sign that consumer preferences are flexible when it comes to how they consume their marijuana.

According to recent data, the share of total cannabis sales attributed to edible products increased in at least four states: 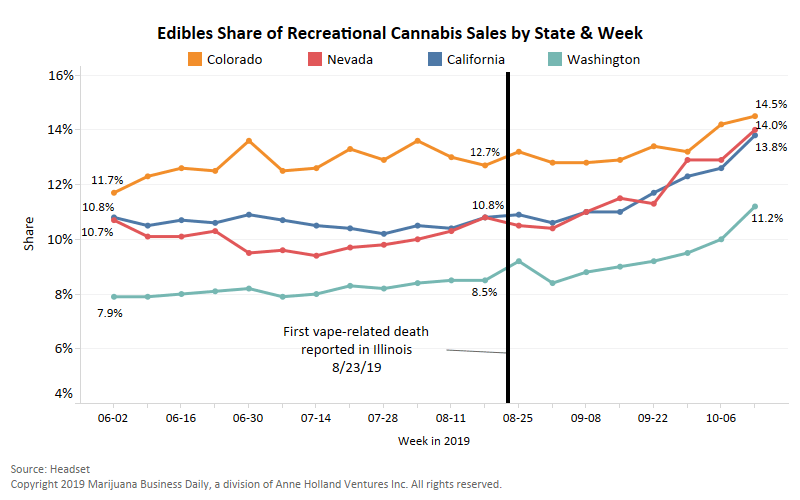 What’s more, the sales of vaporizer products seem to be stabilizing—and in some cases rising—in all states except Washington. Which is a good thing, because health officials in New York and Connecticut have described the black market, not the medical or legal industry, as a “major contributor,” blaming it for “just about all” of their cases of vaping-related illness.

The United States Department of Agriculture released its proposal for a set of regulations governing industrial hemp cultivation last week, and the rules are less restrictive than some expected. The guidelines were be published in the Federal Register last Thursday and take effect immediately.

By law, cannabis crops must have a THC content of 0.3% or lower, to be considered industrial hemp. Acknowledging the “measurement and uncertainty” inherent in agriculture due in part to unpredictable genetics, the USDA rules proposal gives farmers a 0.2% cushion on the THC content of their crops, meaning only those testing at 0.5% or higher would be treated as non-compliant.

“USDA recognizes that hemp producers may take the necessary steps and precautions to produce hemp … yet still produce plants that exceed the acceptable hemp THC level,” the rules say.

Still, farmers with hemp that tests at 0.3%-0.5% THC “would still need to dispose of the plants,” the agency said.

Along with the rules, the USDA issued a guidance document on testing protocol to further ensure control around the types of test results coming in. Under the new federal crop sampling and testing provisions:

These rules, and specifically the THC content allowance, will offer farmers some reassurance they won’t face arbitrary penalties because of a few fractions of a percent.

Be Fearful When Others Are Greedy
Scroll to top