As the spread of the coronavirus continues and anxiety for Americans escalates, operators of cannabis dispensaries have reported that business is booming. Named by several cities as “essential businesses,” dispensary owners have reported long lines of customers, similar to what has been seen at grocery stores and pharmacies. 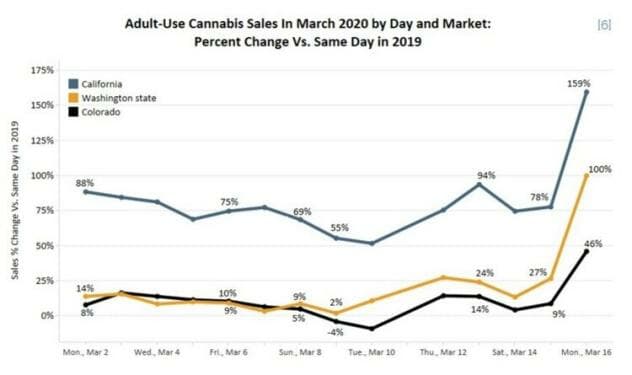 “We’ve had both lines of cars and lines of people wrapping around our buildings,” Steve DeAngelo, co-founder and chairman emeritus of Harborside dispensaries in California, told ABC News. “It’s not about getting high, it’s about being well.”

Officials in some cities, such as San Francisco and Denver, originally did not include dispensaries on the list of essential businesses that can stay open during the crisis however after an uproar from cannabis consumers, the city had a change of heart.

“The Department of Health today clarified that since cannabis has medical use, dispensaries will be allowed to operate as essential businesses just like pharmacies are allowed to do,” San Francisco Mayor London Breed announced last Tuesday night.

Many cannabis dispensaries are shifting to online orders for pick-up only to avoid having customers in close contact inside their stores. Legal marijuana dispensaries have also seen sales spikes since Friday in Colorado, Oregon, Alaska, Nevada and Washington – in Washington state, sales jumped 33% last Sunday compared with a week earlier, with purchases of more than $50 increasing from 16% to 21%.

How COVID-19 Will Impact the Private Cannabis Markets

KEY Investment Partners published a blog earlier last week sharing their thoughts on how COVID-19 will impact the private cannabis markets, why they believe recent events could uncover opportunities for savvy investors and how ‘winning’ companies should act in a downturn based on a study conducted by Bain & Company.

The cannabis-focused investment manager summarized the expected impact of COVID-19 on the private cannabis markets in four key points:

Given the strength of the cannabis consumer, they expect that cannabis companies who can weather the storm today will continue on their rapid growth trajectories once the pandemic is under control.

Under a proposed collective bargaining agreement approved by team owners, NFL players would no longer be subject to game suspensions for testing positive for THC. The new policy was distributed to players on the 20th of February and is pending approval by the NFL Players Association. Additional cannabis-related changes proposed in the agreement include:

Shortly after the MLB announced that it would remove cannabis from its list of banned substances in December of last year, Dallas Cowboys owner Jerry Jones and former New England Patriots quarterback Tom Brady both stated in interviews that the NFL would likely soon be forced to modernize its approach to marijuana.

“I think the world is sensitive to the issue regarding marijuana, and it’s also an issue contemporarily that we are excited about being in-step with the social and legal scene as it goes forward,” Jones said in an on-air interview with Dallas radio station 105.3 The Fan in February.

If ratified, the deal would make the NFL the latest major sports league to loosen cannabis-related restrictions. 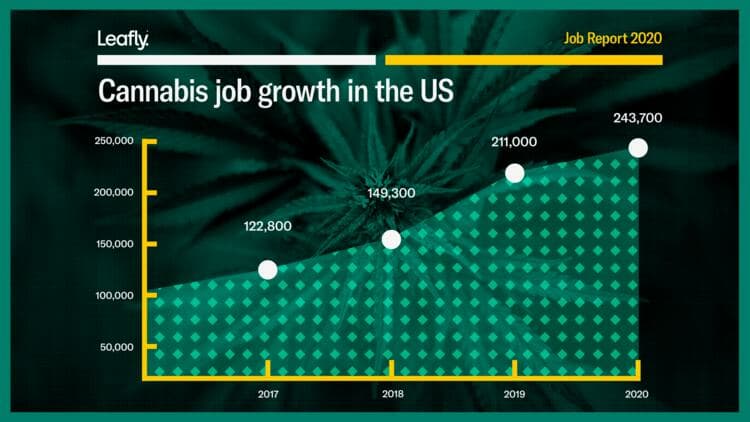 According to Leafly’s 2020 Job Report, the legal cannabis industry saw a 15% YoY increase in employment, adding 33,700 new jobs nationwide. In the same period a year earlier, it saw a massive 62% YoY increase – the cannabis sector continues to be the single greatest job creation engine in the US, maintaining the title as the fastest growing industry in America over the past four years.

“Cannabis has essentially doubled its job count between January of 2017 and January of 2020. There is no other industry that comes close,” – Leafly Editor-in-Chief, Bruce Barcott.

This increase is even more remarkable considering some of the events that took place over the past year in cannabis including the national vaping crisis, the large layoffs at industry-leading companies in response to the cannabis public market correction, and significant regulatory changes in CA & MI . The industry’s growing pains were more than offset by tremendous job growth in new markets.

While the emergence of COVID-19 will most certainly have a negative effect on the projections in Leafly’s report, the cannabis industry continues to grow at a rapid pace and will continue to add jobs even in a slowing global economic environment.